If you’re in the maker for a reliable paintball marker, the name Spyder has probably already come up. Specifically, you’ve probably already considered what the Spyder Fenix could do. Keep reading for an in-depth breakdown of this popular weapon. 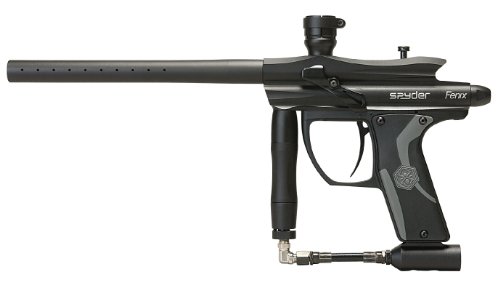 While there are many features that set the Spyder Fenix apart from other models out there, certainly one of the most obvious is the valve system. Spyder used an Eko valve system and the technology involved is definitely unique. In fact, you’ll only find it in Spyder hardware.

Essentially, what this valve does is allow the marker to shoot off as many as 1,600 shots from a 20oz Cos tank. Usually, as you may know, that number would be 800 shots from one normal tank. Spyder achieves this accomplishment thanks to a low-pressure dual source of air system that makes for greater capacity without actually losing any power. The company calls this, “synergy of engineering” and it’s truly an impressive feat. You can probably imagine how this feature would come in handy during the heat of battle.

Two of the most important things a marker can bring to the field of combat is power and reliability. Fortunately, the Spyder Fenix has both in spades. Thanks to an LEP circuit board, this marker is able to maintain its Break Beam Eye and other features working at an optimum level at all times.

Spyder Fenix Review This weapon’s 9V alkaline battery will deliver ideal performance as well. However, the charge does not last for as long as you may have hoped. Fortunately, this marker can also be loaded with a 9.6V rechargeable battery. Otherwise, it’s a good idea to invest in a second battery so you can make the switch when out in the field and not be caught vulnerable.

The grip on this weapon is fairly thick when compared to other options out there. Though it’s far from uncomfortable—some may even find it preferable—those with smaller hands should be wary. Find a model you can hold first to see if the grip is a good fit for your size.

While this is far from the most exciting feature to consider, this paintball gun is extremely easy to clean which is always a nice feature. If you can’t keep a paintball gun clean, you can hardly expect it to work well in the first place, much less over time.

Fortunately, Spyder handled this issue quite well. The market utilizes a top-cocking bolt with quick strip functionality. So it’s easy to remove and get at the inner workings. Plus, the rear plug comes tool-free so that basic maintenance is something you can handle in just a matter of minutes.

It’s hard to say this marker is unaffordable, give the market and all this gun can do. This is also one more reason why the Spyder Fenix is a great choice for beginners.

So no matter what your precise needs are, this weapon should be up to par. While it’s great for beginners, any veteran will be satisfied by this marker too.