If you are searching for a great deal on a high-performance paintball gun, the Tippmann A5 model might just happen to be a perfect fit for your specific needs. There are so many different integrated features and highlights of this particular model that forces it to stand out among its competitors in more ways than you might think. Being able to identify those key points will help you to see just how much of a solid deal and overall bargain the Tippmann A5 can be for you.

Let’s get started with Tippmann A5 Paintball Gun review. 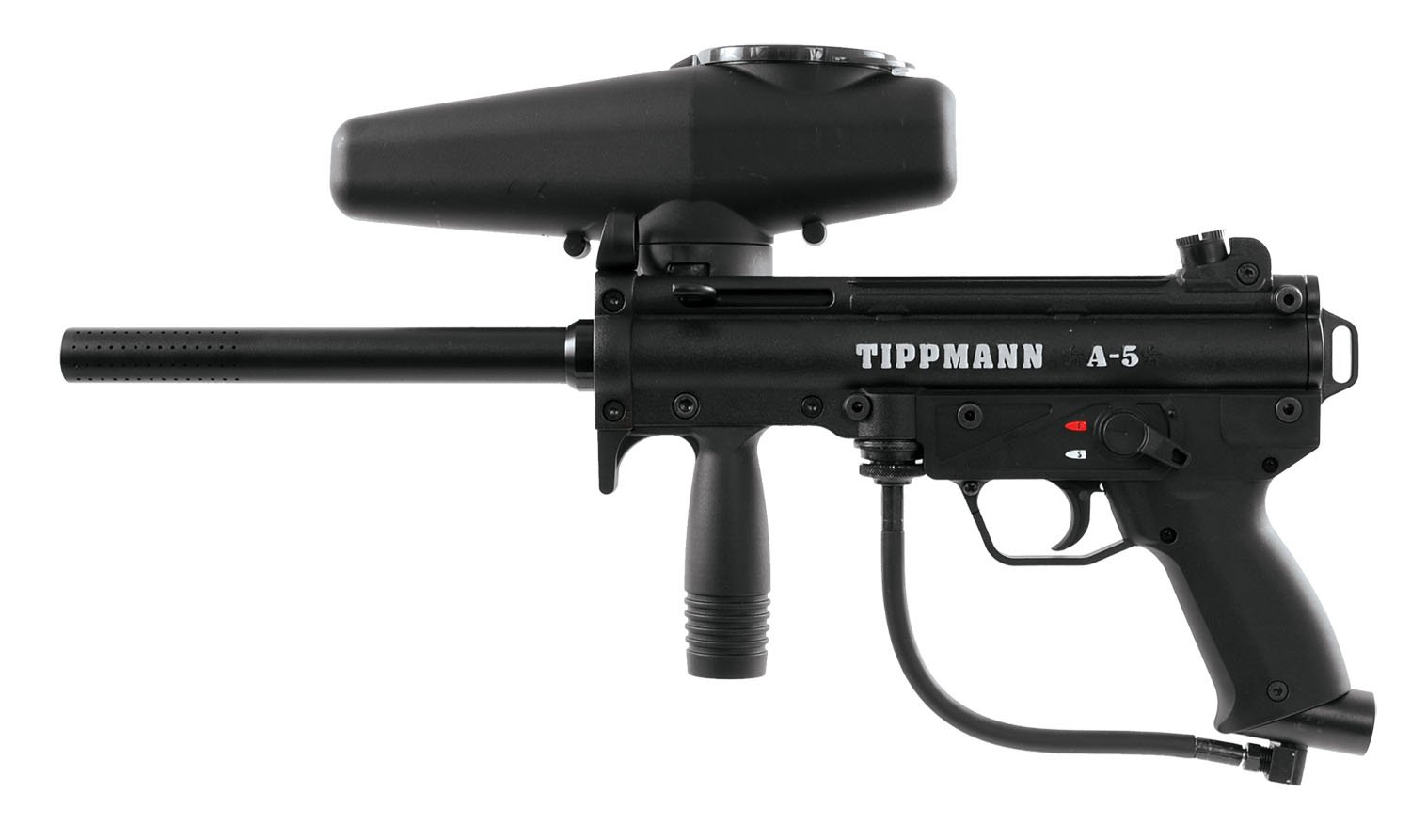 If I had to define Tippmann A5 in a simpler way then basically I would say that it is an upgraded beast version on Tippmann 98. Tippmann A5 is perfectly fine for intermediate players as well as those who are just beginning. If you look at the design, it has an amazing texture on the body which gives you the feeling of holding a real gun.

Tippmann A5 is widely known for its durability and toughness. Also, it supports a wide range of upgrades and mods which makes it one of the best choices for those who are looking to invest in a high-end and durable paintball gun.

Now, let’s find out what features Tippmann A5 offers.

It comes with the Tippmann’s patented cyclone feed system which I really like due to the fact that paintballs are fed smoothly from the hopper even on a low battery. This system is powered by the gas(from the tank) and not on the batteries which is really helpful.

Tippmann A5 can easily shoot up to 15 paintballs per second with minimum deviation. The E trigger system brings this gun into a beast mode where you won’t find any of your paintball broken in the gun with full auto rapid firing.

Tippmann always maintains the reputation of its brand by making durable products. Just like other Tippmann markers, Tippmann A5 is a well-built gun and a really durable product. It can easily last more than 5 years or more. It is because this marker is made up of a strong metal frame and premium quality plastic is used in the rest of the body.

Basically, you can just beat the crap out of these guns throw them off a truck, drop them from a height and they still work perfectly fine.

Its durability is the major reason why Tippmann A5 is used in most of the paintball fields as rental guns. They just keep on working and you really don’t have to do that much to them.

It weighs 1.41kg which in my opinion is optimum. It doesn’t feel too heavy nor too light and the best thing is that the design and the texture on the marker give the feel of holding a real gun which is awesome. I really think that if you’re into Mil-sim gameplay you’ll definitely love this Tippmann A5 marker.

Shooting with Tippmann A5

As I described in the specifications, the base model has semi-automatic action and shoots around 13-15 paintballs per second. It depends on the player’s ability to press the trigger. So, if you want more advanced performance or generally I say beast mode, you can add E-grip and response trigger to the A5.

Many speedball players use E-trigger that allows you to have a single shot or full auto firing modes.

A5 comes with the standard 8.5-inch barrel that gives you the ability to shoot up to 150ft. Some players want to increase the shooting range. For that, you can buy an Apex 14″ extended barrel which gives you an increase in range as well as accuracy.

With A5 it is very rare that the paint breaks into the gun but if it does, you don’t have to worry much regarding the cleaning of the gun.  You can field strip the Tippmann A5 quickly in just 1.5 min and that too without the use of any tool.

Hence, with the Tippmann A5, cleaning and maintenance is a really easy job.

One of the biggest highlights and premium features of the Tippmann A5 paintball gun that sets it apart from its competitors is the revolutionary Cyclone Feed System. This cutting-edge feed system is able to connect the air system directly to the feeder sprocket. By doing so, it is able to provide a substantial amount of power that is necessary to release a plethora of paintballs just as quickly as you can pull the trigger to fire them.

You will no longer have to worry about being stuck with a paintball gun that simply does not measure up to your standards when it comes to trigger release and ball output because the Tippmann A5 paintball has been designed to blow you away with its performance in this regard.

When Tippmann developed the Tippmann A5, it was their target objective to introduce a model that could be disassembled and reassembled in a fraction of the time. Studies have proven that the Tippmann A5 can be easily stripped down completely and even reassembled in less than one minute. The best part is that you can achieve this rate of speed without even having to worry about using any type of tools to get the job done. This can even be accomplished when you are trapped in the heat of battle!

In addition to the high-performance and speed that the Tippmann A5 paintball gun has become known for since it was first released, there is also a host of top-notch components that need to be taken into consideration as well. If you are already blown away by the speed capabilities of this high-quality paintball gun, then you have seen nothing yet!

The end cap of the Tippmann A5 paintball gun is shock-absorbent, which is exactly what you will need during the heat of the moment on the battlefields. Over time, the end cap of many other paintball guns can become worn down in a relatively short period of time. However, the Tippmann A5 was specifically designed to offer a considerable amount of durability so that you will not have to worry about it wearing down too quickly.

There is always a wide-mouth hopper that fits 200 rounds in addition to a front-cocking knob that provides you the opportunity to take advantage of a receiver that is fully enclosed. Even if you want to upgrade the paintball gun, you can do just that with a host of optional features – including sniper barrels, response trigger system and even a collapsible stock.

With other great features such as a low-pressure kit, double trigger, and even an expansion chamber kit, the Tippmann A5 clearly provides consumers with the total package.

Overall, the Tippmann A5 is a great gun for beginner and intermediate players. It comes with a 2-year warranty on it. So that’s ease of mind if you pick up a new gun like that. Definitely check it out and try it yourself.

If you want to spend a considerable amount of money on a paintball gun that is not going to last very long for one reason or another, then there are so many options available in local stores and online that can meet your vague needs and expectations. However, if you are searching for a paintball gun that provides the superior level of quality performance that Tippmann has proven capable of providing over the years, your best bet would be to invest your hard-earned money into the Tippmann A5 paintball model.