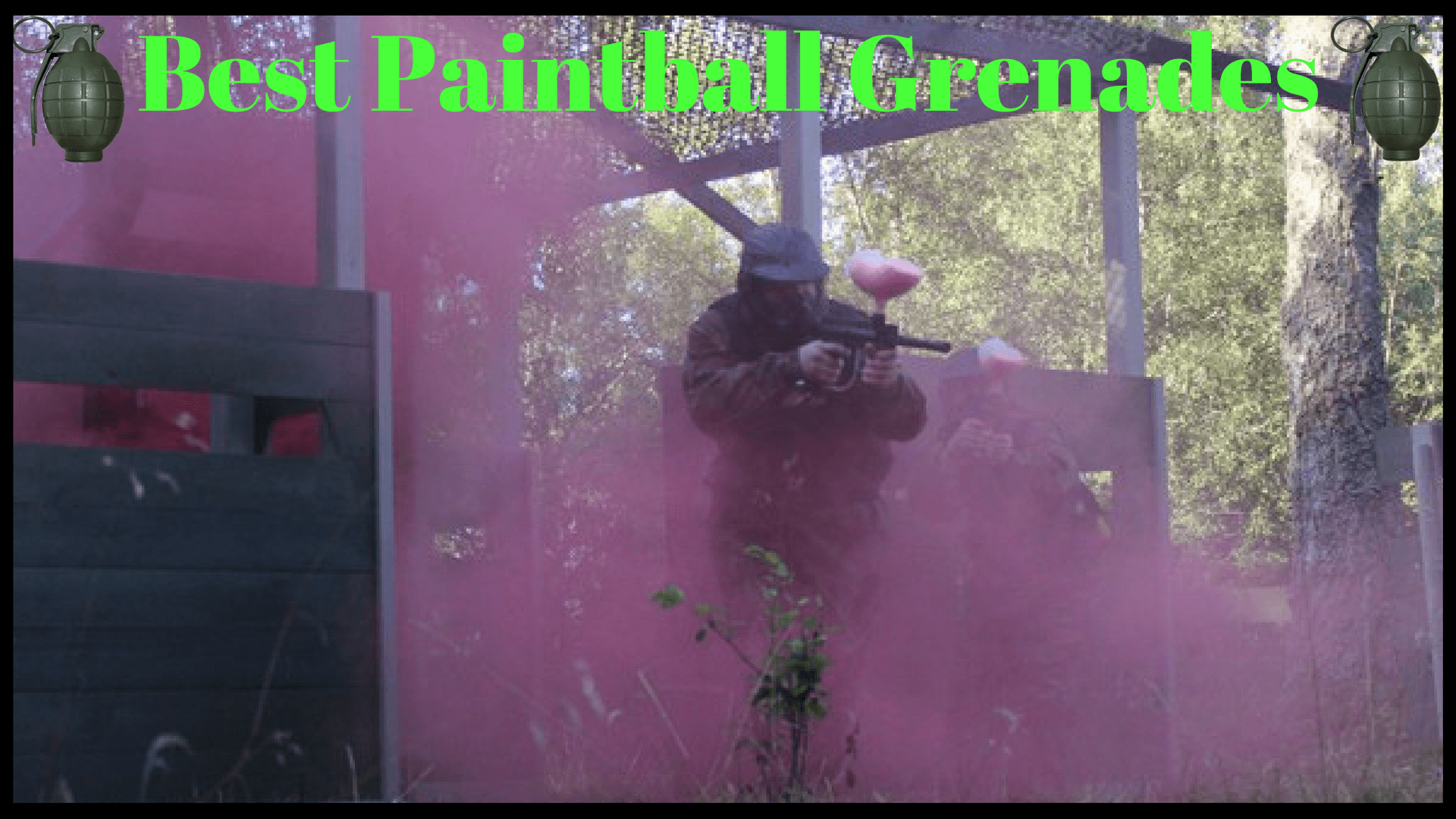 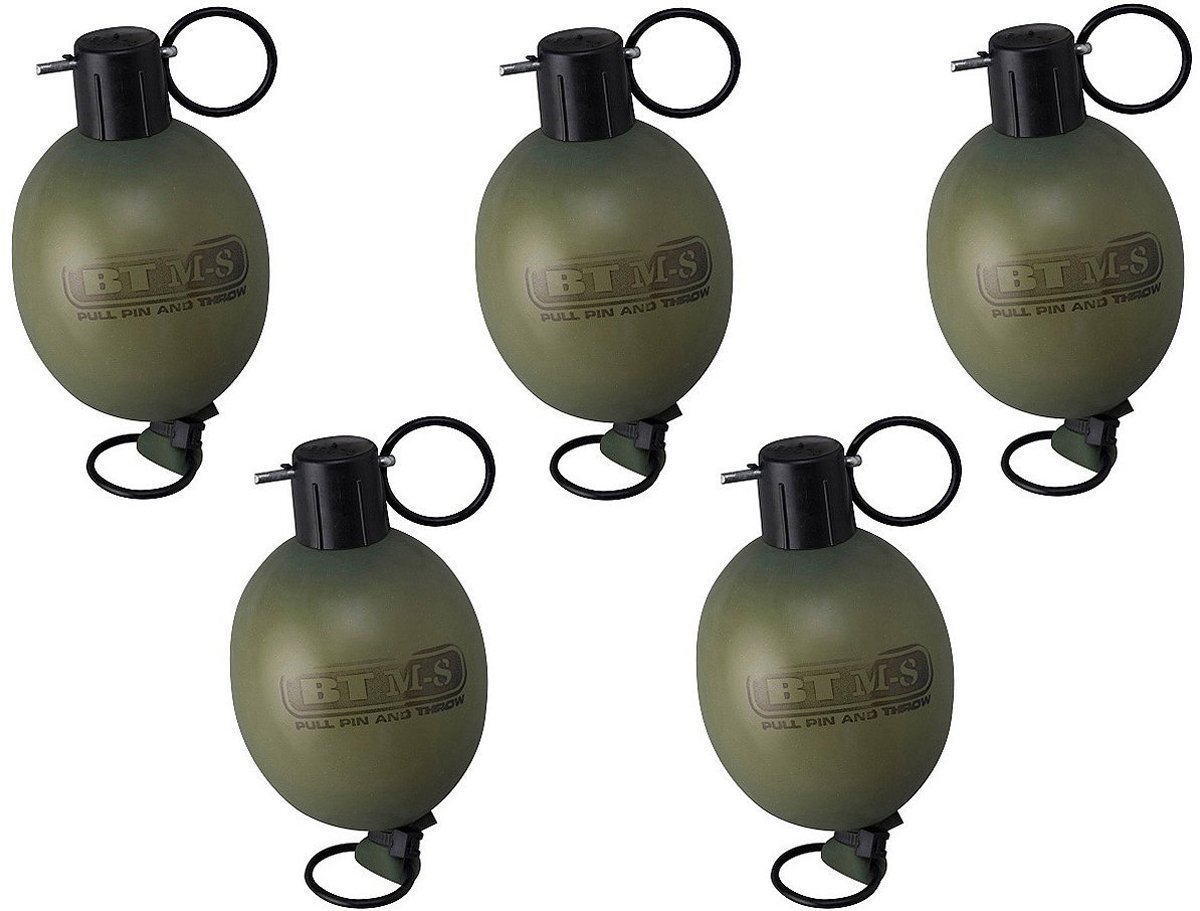 Empire BT M12 and M8 paintball grenades are the only ones that are actually using a really good brand-name paint inside of them. They’re using RPS paint so it’s a good thick fill, super bright colors and great coverage on them. The way they work is very very simple. On the bottom section, there are just clips that you could hook them onto your belt or put them wherever you want.

Most importantly BT M8 and M12 Paintball Grenade are exactly similar. The only difference is just the amount of paint in each one of them. M12 is the bigger one and the m8 being the smaller.

Obviously, when you’re just clipping them onto your body you do need to be super careful that you’re not gonna crush them. When you dive, roll or crawl or whatever you happen to be doing but you should be careful.

How do they work?

The way these are going to work is pulling out the pin at the top of the grenade. You’re gonna yank the pin out the side of it.  Do not take the cap off.

You just pull the pin out and throw it. Find your target, the group of people that you’re throwing it at and throw it near them. You want it to hit the ground, wall or hit something that’s gonna give it some impact that’s gonna pop the cap right off.

It’s gonna start spraying everywhere. They say that the coverage or the range of paint spray on these is 30
plus feet so you’ve got a pretty big area that you can cover with these.

Again with the marking ability of RPS paint you’re gonna see a nice big bright pattern. One thing they do say about these and this goes true with any grenade setup is if you’ve had it for a while and it’s just been sitting, it’s a good idea to shake the grenade first before using it.

Let that paint mix back up and it will get you the good coverage and paint spray out that you would like to see.

Also, these grenades come in a lot of color availabilities. I definitely recommend you to check them out.

If you have not tried a smoke grenade in a paintball game yet just do it. Honestly, they’re awesome and super fun using them. There are basically 3 different types of Enola Gaye Smoke Grenades. We’ll cover all 3 types here:

It is technically pyrotechnic so you can’t just go throw them off. Always make sure from the field staff that smoke grenades are allowed in the particular playfield.

Always wear gloves because they do get pretty hot. You really shouldn’t be holding it for very long but it’s better to wear gloves. On that way, you won’t get any burns or anything too severe but it’s just nice to be safe.

One final note on safety, don’t throw them in any big piles of dead leaves or anything that you think could catch fire and when you’re disposing of them it is recommended that you actually soak it in a bucket of water for about 48 hours just to make sure there is no chance of them ever lighting up again.

Also, only touch them 5 minutes after it has gone off because they will remain hot for a while.

That’s the important stuff about responsibility and safety guidelines. So the first one is the Enola Gay Wire Pull smoke grenade. It is a pretty basic grenade. It comes in 8 different colors. It’s working is also quite simple. Remove the cap, you would then pull the pin away from it and throw the grenade.

You’re good to go now. It’ll release about 20,000 cubic feet of smoke so pretty good amount and it’s gonna do it in about 90 seconds to 105 seconds.

So it’s going to burn for you in just under 2 minutes and fill up whatever area you used it in. So, it is a really cool smoke grenade.

Next one is Enola Gay burst smoke. Now, this is the same amount of smoke as the wire pull so 20,000 cubic feet of smoke. It’ll do it in about half the time.

It actually got a hole on the front and on the back. Once you pull, it activates after two seconds. Toss it and then you’ve got a lot of smoke very very quickly coming out of both ends.

I personally love using these grenades. I highly recommend them. 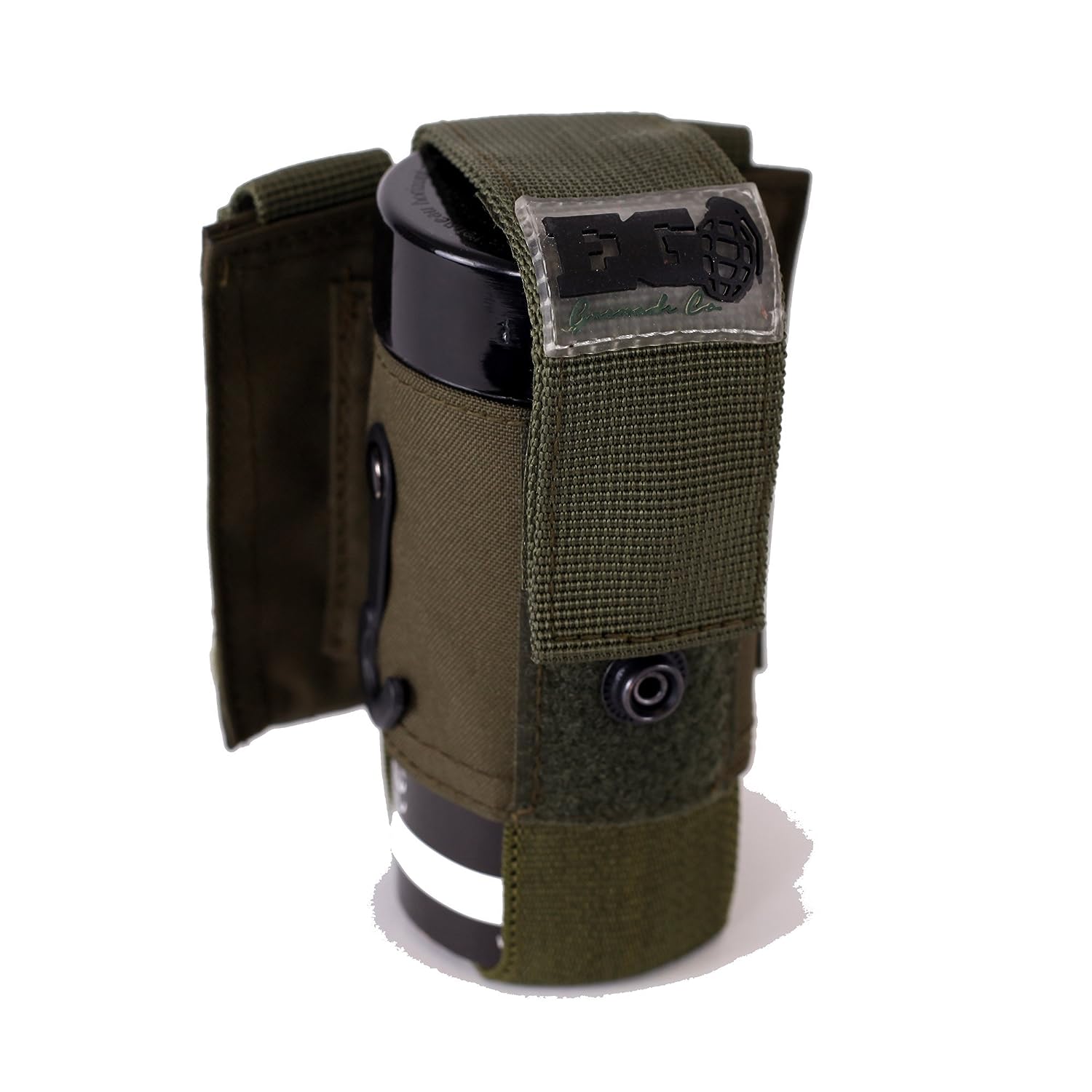 Last but definitely not least this bad boy this is the EG 18. This is a big intense smoke grenade. This is 60,000 cubic feet of smoke so it’s about 3 times as much smoke as the other two and it releases it in about 90 seconds to 105 seconds.

So it takes about the same amount of time as the wire pull. It’s putting about 3 times as much smoke so it’s a big deal. It’s really gonna cover an area.

When you use these smoke grenades pull the pin away from the body of the grenade. Do not pull it up otherwise it might actually pop out without triggering as a safety feature as It might get its pin pulled accidentally while it is hung to your belt. Valken V-Tac Paintball Grenades are next on my list of best paintball grenades in 2022. So, they look just like elastic tubing or surgical tubing that has been filled with paint and then sealed off on both ends. It is kind of rubbery and kind of squishy. I don’t recommend squeezing them hard or anything like that because they could burst and it’s going cause a huge mess if it was to blow up in your room or in your car.

Please only use these when you’re at the field. The bottom end is crimped so this would be an end that you just don’t deal with.

So once you’ve given it a shake you’ll grab this ring and pull it out. That’s going to pull this retainer tab right off the top.

Inside there is a plug. When the paint grenade hits the ground, the plug will dislodge and the paint will come spraying out all over the place. Definitely make sure that the people around you and yourself are wearing safety goggles and safety equipment.

You don’t want to get this in your face or in your eyes just out of safety concern.

You can just throw at your rivals in a game and try to get a bunch people out. 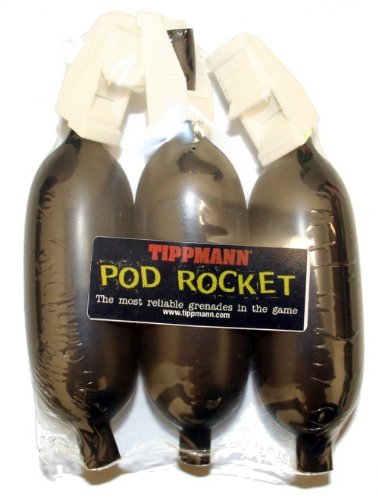 A 3 pack of little Tippmann Pod Rocket Paint Grenades that will conveniently fit into one pod.  Now the idea behind the pod rockets or any kind of paintball grenade is you want to throw them near somebody you don’t necessarily want to throw it directly at them or kind of hit them with it.

You want to get it near them so that when it hits the ground, the paint starts to come off and it starts spraying all over the place. If you hit them with it you know it is kind of a hit and miss kind of thing so you should not rely on something like this to get someone out.

You can hold these or clip them on to your belt with the clip ring attached to the grenade. When it hits the ground or it gets jostled by a wall then it’ll release completely and the paint’s gonna start coming out.

Also, 3 such grenades can fit into one pod.  You don’t need to put them in your pocket or somewhere where you can crush them. So, put them in a pod, keep them in your harness and pull one out at a time whenever you gonna use it or pull all 3 out and throw them all at the same time whatever you want to do.

So definitely check them out. They come in a bunch of different colors. They look just like a like surgical tubing balloon filled with paint inside. 3 pack of pod rockets all of them fit into one pod makes it convenient to carry on to the field.

You don’t have to worry about you’re gonna lose them or you’re gonna crush them. They are super cool paintball grenades. 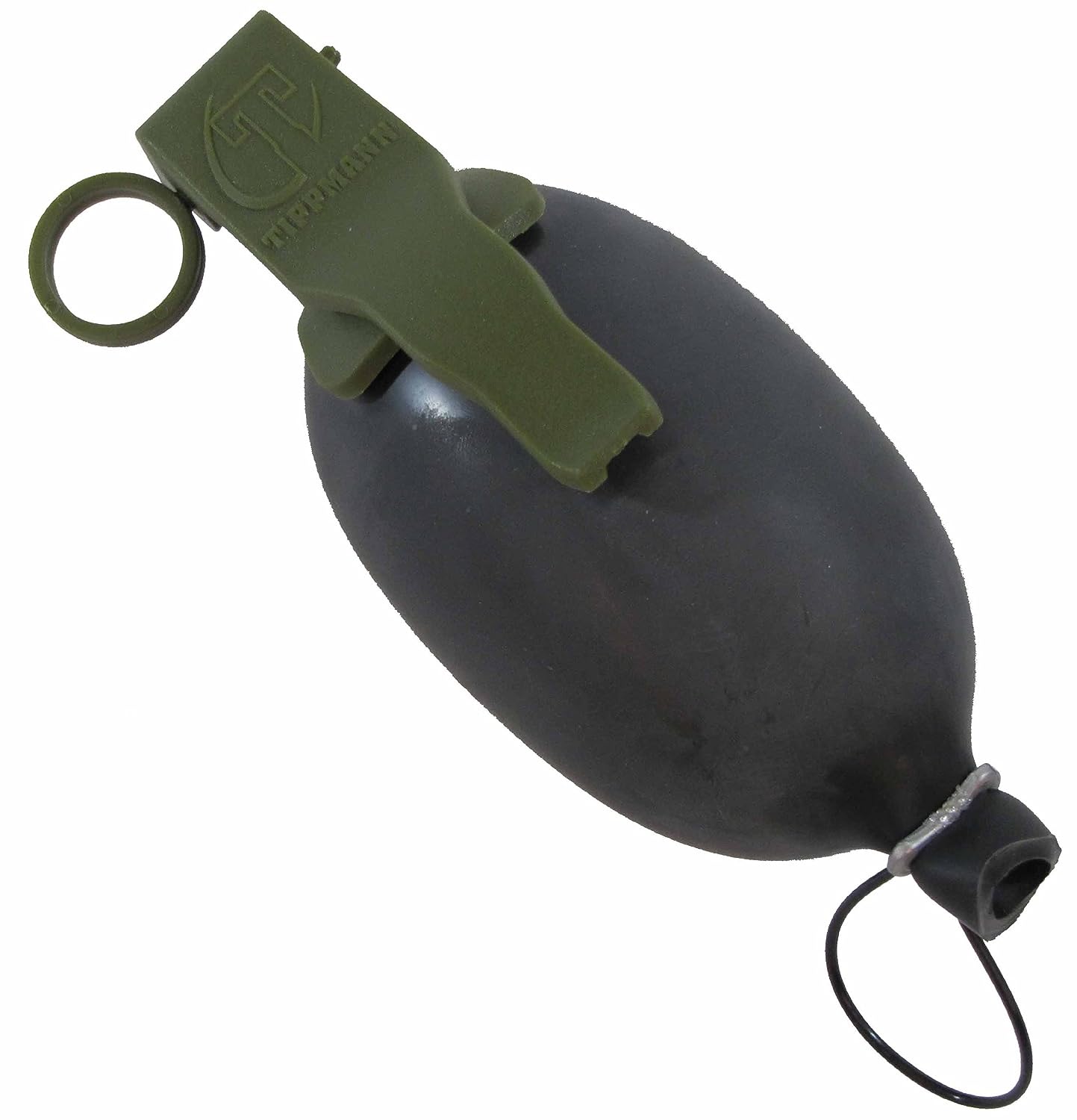 Tippmann Big Boy II Grenade is one of the best and my favorite grenade. It is a 10-ounce paintball grenade and has plenty of paint inside. It has a radius of about 30 feet so we’ll go ahead and open this one up.

To use it you need to pull the grenade pin out. From out this is basically some elastic tubing that has been filled with
paint. It is also crimped at the lower end so don’t try to unclip it. If you do it’s just going to spray paint everywhere.

In order to make this work, the first thing I would do is obviously give it a good shake so that the paint doesn’t settle inside. You want to make sure that it’s mixed up nice and good.

Then you can pull the pin out and you are ready to throw this grenade on your rivals. Obviously, you want to get it
close to whoever you’re throwing it at. It does have a 30-foot radius range where the impact of the grenade would be seen.  I have seen good paint grenades thrown at people and they’ve landed right next to them and they
haven’t gotten paint on them.

It’s very rare but it does happen. But with this grenade, it is impossible because whatever direction this thing is facing when it starts to spin around and spray paint. It is possible not to cover everything but there’s a good chance you’ll get whoever you’re throwing it at.

If you’re looking for something that is powerful, super reliable paintball grenade you should definitely check these out. 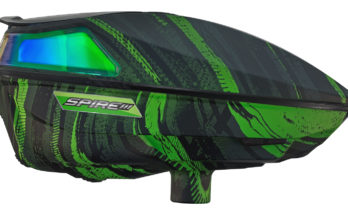 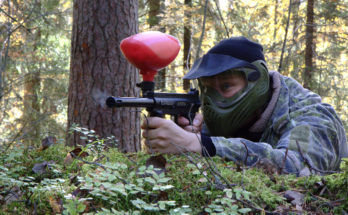