In this post, we review the Tippmann X7 Phenom Paintball Gun with flex valve technology. 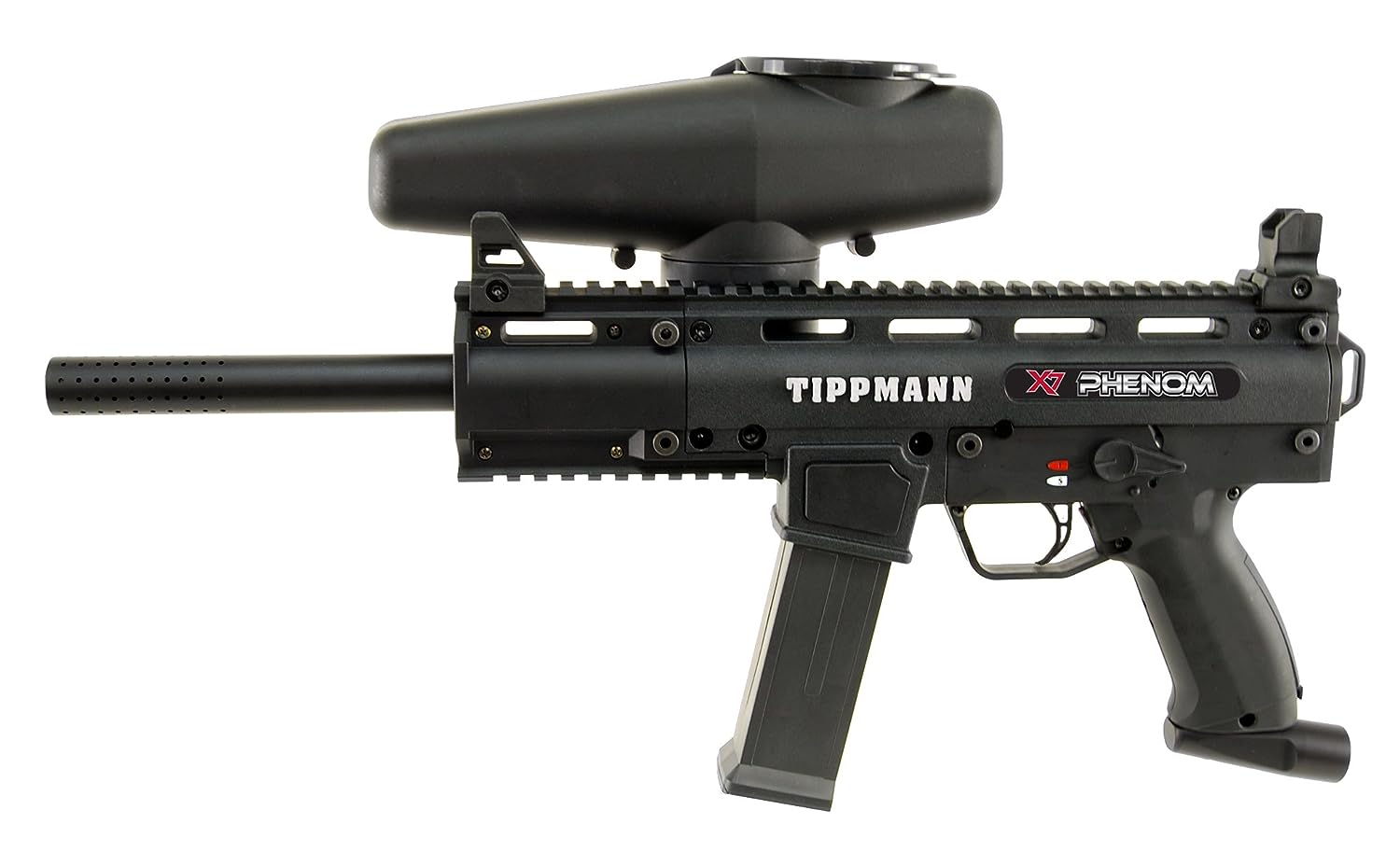 This is a pretty interesting paintball gun.

It has a valve system in it which is kind of like a spool valve system. It runs at an input pressure of about 300 psi. Its low but not as low as other spools that you’ll see.  However for a Tippmann Gun 300 psi is pretty low.

The platform that shoots is much more stable, smoother, quieter and comes with an electronic grip frame so you get all the firing modes plus the adjustability in the firing modes. So really it will do anything that a super high-quality paintball gun will do just maybe not the efficiency that you get out of the weight of it but that’s not really what you’re looking for in a Tippmann anyway.

In a Tippmann, you’re looking for reliability, realism and potentially a certain kind of look in a gun which is typically skewed more towards the military side.

Let’s see what we get inside the box of the Tippmann X7 Phenom Paintball Gun.

Top piece you’re going to see all the accessories that are possible to put onto the Tippmann X7 Phenom.  It’s got tons of different pieces that you can put onto there to make it look like any particular gun that you’re interested in. Maybe you want to leave it just as is or you can want it to look like an M16, G36, UMP, Scar, AK etc.

So there are tons of different options that you can put on. This is definitely a function or feature of the gun that might draw you into buying it.

All this stuff is removable you’ll like it you don’t want it you want to put it on there or you can do whatever you want with it. That’s the great thing about the guns is their customizability.

You get a macro-line less setup so it is of gas thru grip style.

There’s a button that you would use to access your settings inside the gun if you wanted to change firing modes or change rate of fire.

The cool feature about the Tippmann X7 Phenom Paintball Gun is that you do not need a battery to run it in semi-auto. So if you’re out there playing and you’re shooting with a mode or something like that and all of a sudden your battery dies you’re not stuck.

Just switch it from full to semi which is the F setting and you can still shoot the gun in a kind of mechanical system but without needing a battery. So the gun will still work if you don’t have a battery in it. You just can’t go into the mode settings and shoot a mode. You can only shoot semi-auto.

Other than that though it’s pretty straightforward with what you’re used to seeing from Tippmann.

The Flex valve is inside and it’s pretty easy to pull out. It doesn’t require too much wrenching. Maintenance is going to be easy you can get the whole valve out and putting it back together is the same process.

There are two different pin lengths on the back there’s a long pin and a short pin. The short pin is going to go up at the top whereas the long pin goes at the bottom. If you get them mixed up or the other way around it’ll still work it’s just one will stick out further and one won’t. If you have it right they should look like they’re meant to look like.

So the maintenance is super easy on the gun. The parts are cool you also you get some accessories along with it, you don’t need to use them if you don’t like the look but you can if you wish to do so.

If you want a gun that’s got a lot of potential right out of the box. Check this out. The Tippmann X7 Phenom comes with the electronic frame comes with the modes, accessories, runs on compressed air or CO2. It really does everything you need it to do plus you’ve got the look of that military or scenario style feel.

What To Wear During Paintball?